a secret haven for art

Sarah Walker Gallery is a contemporary art gallery situated along the pier, in the fishing port town of Castletownbere, Co Cork.

The white-wash stone building, renovated from a carriage house resides among both the shore and the sea on the far west end of the harbour. Ascending from the water the gallery is spacious and bright. A gratifying space to view the range of art exhibited.

Currently on view is a selection of paintings by Sarah Walker and a range of paintings, ceramics, photography and drawings by local artists.

The upstairs area on the mezzanine has become an extension of the gallery titled "Works" including smaller paintings, cards, posters and design pieces. Creations of the likes of the local wood-turning Connolly brothers, etchings by Danny Osbourne and ceramic vessels by Sinéad Fagan.

It also has a kids corner where children can draw and make their own work to display.

The gallery is also a venue for a range of cultural live events for both children and adults alike. Highly anticipated live music, theatre and literary events at The High Tide Club are hosted throughout the year in the gallerys eclectic space.

The Gallery During Renovation

The day that Sarah Walker’s husband Kieran discovered the For Sale sign in the window of the unused carriage-house on the edge of Castletownbere pier was a good day - the start of something great.

The mammoth task of making the ruin habitable started soon after. It stands, one toe in the water and in previous lives served as a carriage-house, an abattoir and a fish processing factory, with access from the main street. This access point has since become a site for a house and home. Today visitors come down along the quay and onto the slipway. Pier access had been left to deteriorate when the building was left vacant. It was restored by the Department of Marine in 2008.

The original stone walls were saturated with dampness and choked with ivy outside and in, making its way through any cracks. The exposed stone, but white washed walls, were stained by mould in various shades of green and pink. Traces of its lifetime were still visible in the timber posts once used to tie horses. They remain in place under the wall boards on the west wall. Rain poured through the gaps in the slate roof into puddles on the floor.

But it was a solid shell with big windows and Sarah saw the potential.

The ivy was cleared and an indoor ‘shed’ with a corrugated iron roof on a timber partition, served as a small studio for Sarah to work in, as the clean-up continued around her. The doors opened to the public and art was hung on the walls.

In the spring of 2007 the gallery closed so that a new roof could be erected. For a time the walls stood up out of the water like a pair of shoulders missing a head.  Beara Joinery, run by local craftsman Marc Jeisy, worked with Sarah’s husband to build the A-frame timber trusses inside the gallery.

One of the quirky features of the building is the spine of the roof. The ridge curves round to the sea like back bone of a great fish. If you are curious, put your head out the mezzanine window looking south to just to take it in.

On a clear day you can also enjoy the great views of the legendary Hungry Hill to the east.

The pier has a new pair of resident swans and a shy heron that can be spotted late in the evening taking a bow on the slipway. The fishermen come and go and if you are quick you might just bag the makings of a fish supper.

The gallery is now a remarkably light space displaying work by Sarah Walker and local and emerging artists and hosts many special nights of music. 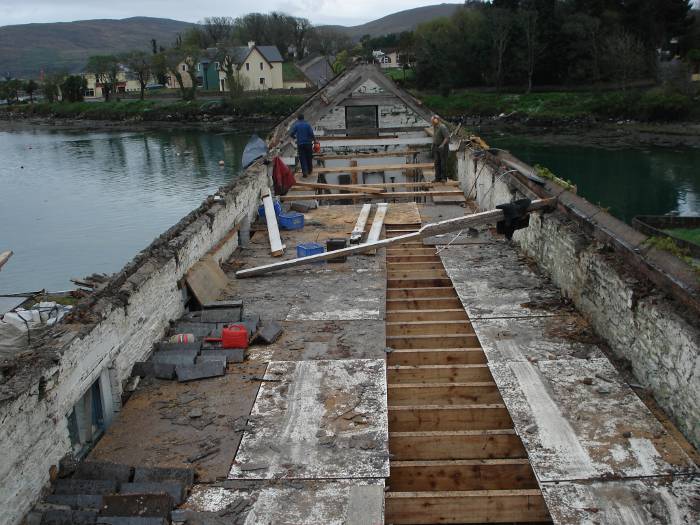 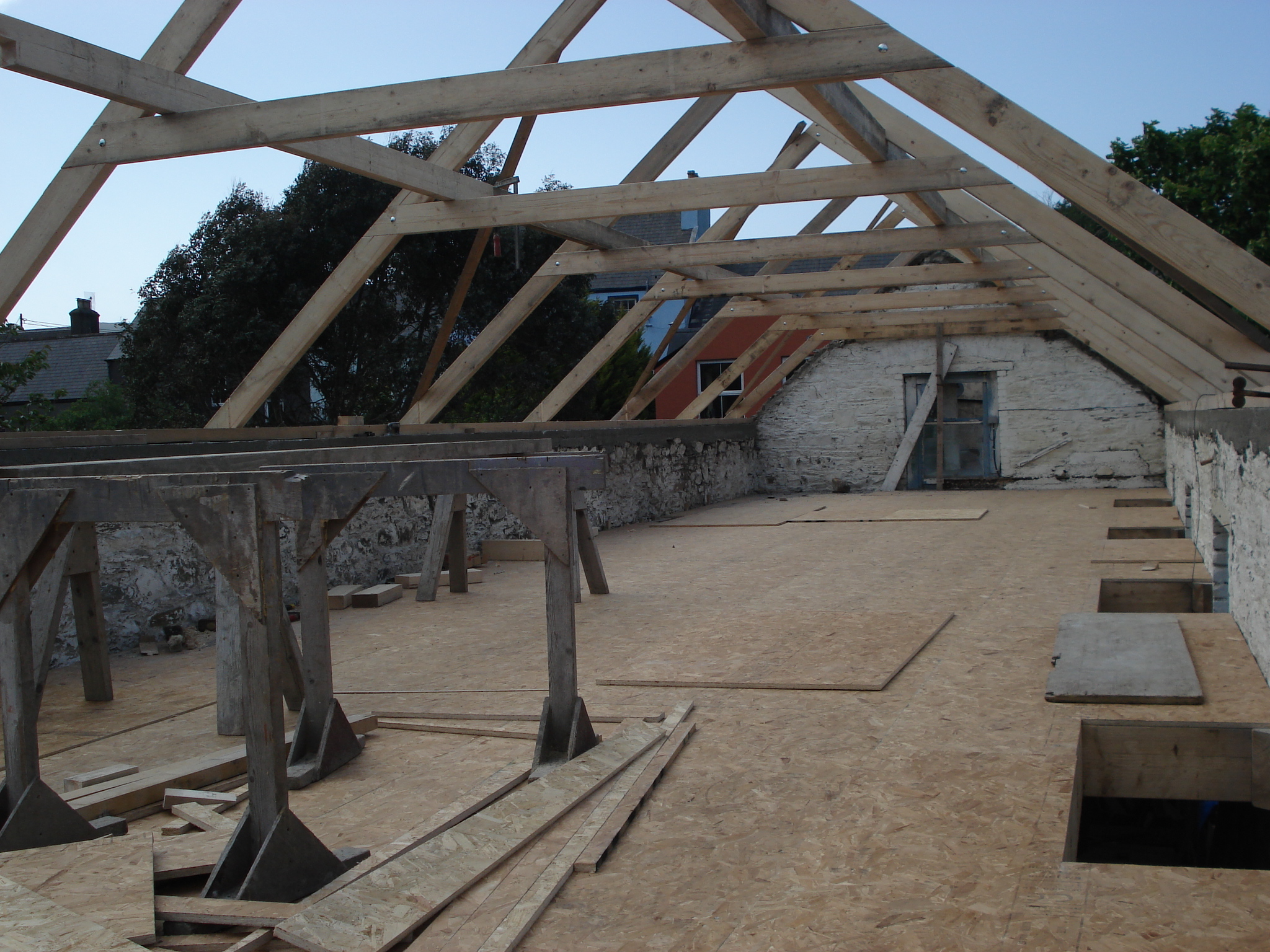 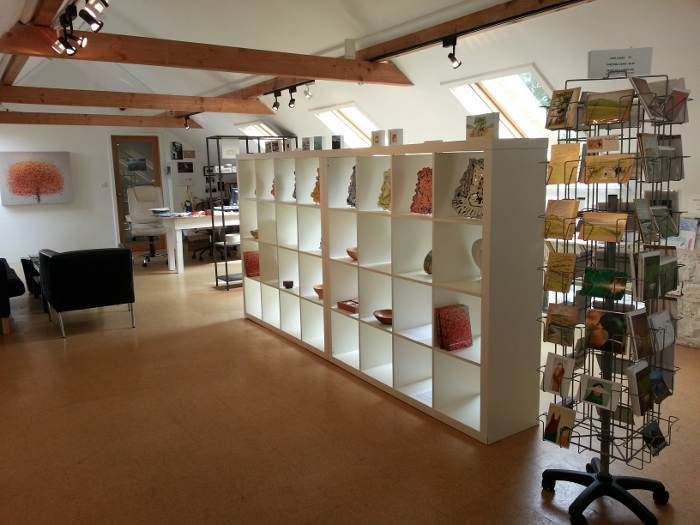 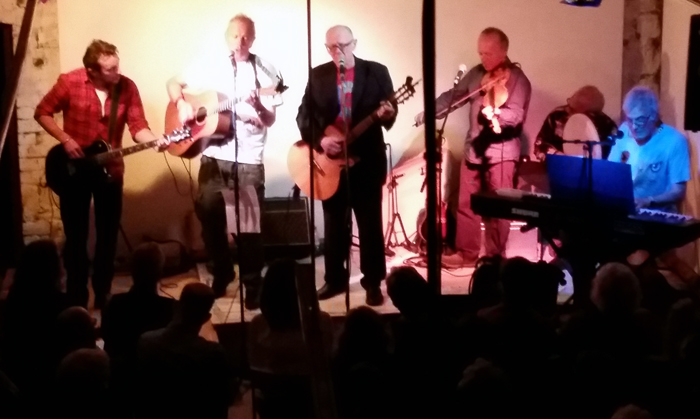 "The High Tide Club"  is hosted by the gallery and is ever popular with locals and visitors passing through. The line-up includes regular arts events like music gigs, theatre, poetry reading and puppet shows for adults and children alike.

The High Tide Club is a venue where you are guaranteed to hear & see an eclectic mix of great music, plays, poetry readings & comedy acts. 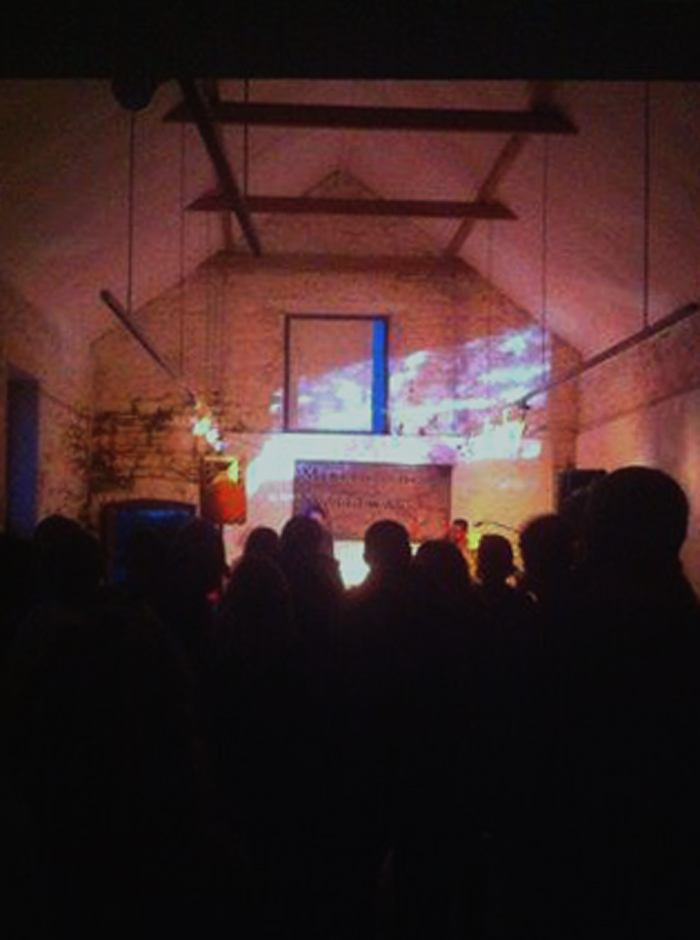 Exhibitions from 2000 in Bank Place included:

Rachel Parry exhibited her sculptures alongside the paintings of Esther Balazs.

Summer 2001 the gallery held two exhibitions, one of design-work and the other of paintings.

Summer 2004 there was an exhibition of a selection of artists connected to Beara.

Also with Beara connections, Frieda Meaney exhibited prints and paintings about a house in Beara which her friend Monika Fabig (Germany) had photographed. That exhibition of summer 2005 included those photographs and a short film about the Dursey cable car by Margaret Fitzgibbon.

In 2006 the gallery showed work by two young award-winning artists, David Grannell and Mike Hannon, just graduated from the Crawford College of Art and Design, Cork.

In 2007, major renovations were in progress on the gallery building.

In the summer of 2008, the Gallery re-opened. The opening show featured graduates from the National College of Art and Design in Dublin, Edia Connole and Sabina McMahon, and the Crawford College of Art in Cork, Rona Neligan and Sarah Kearney.

The Summer Show 2009 was a selection of graduate artists from the Crawford, NCAD and IADT including Michelle O'Shea, Mari Buttimer and Nedyalka Panova from the Crawford, David Eager Maher, Niall Dooley, James O'hAodha and Kim Murphy from NCAD and Aoife O'Sullivan from IADT.

2010 Summer Show featured works by graduates from NCAD inlcuding Luke Deignan, Kallam Hillary, Gemma Marie O'Shea and Ciara Murray were graduates from Limerick School of Art and the work of Lucille Bonne from the Crawford College of Art.

'The Paper Garden' Summer Show of 2013 included among others, Caroline Keane's 'Giant Paper Jack in the Beanstalk' made with handmade paper climbing towards the ceiling of the main gallery space; inspired by Caroline's interest in recycling. Emma Johnston created a papered wall with matching upholstered chairs again with handmade paper. 'Self outside self' by Laura Perrem was a moulded cast of the artists body photographed on a West Cork strand. A short film entitled 'Waterdress' completed her work.

WHO IS GOSH? a solo exhibition by Sarah O'Brien was on display in June 2016

Island - Oileán, a collaborative show inspired by Islands and the lives of their inhabitants by Angie Shanahan, Jacqueline O'Driscoll and Eileen Singleton, July-August 2016

Currently showing are paintings by Sarah Walker and other work.

Visitors are given a warm welcome.

The gallery is open Monday to Saturday 11am - 6pm April through September and most weekdaysOctober through March.