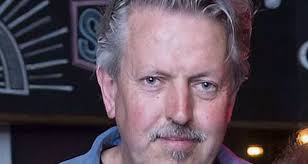 Review by Bobby Green: ''Do you want to know a secret? One of Irelands biggest secrets has just landed on my desk for a review. The golden voice of the Cork native Paul Tiernan is just about to release his 7th album and is touring around Ireland to promote it.

When the album arrived, I thought I’d stick it on, continue with what I was doing and write up a review at the weekend when I have a bit more time. But 4 plays later and work is put on hold until the weekend so I can enjoy this glorious spring weather while drifting away to places only the classics could bring me before. Paul Tiernan’s direction on this album is away from the lovelorn and into the vaudeville resulting in a transformation Kevin McCloud would be proud of.''

Paul describes the new direction he has taken “I wanted to take a new path away from the acoustic guitar, singer-songwriter world I have inhabited and find somewhere more fantastical, less confessional. I could record intimate, dreamy albums forever but to stray from the easy path and enter new terrain is an exciting, fantastic challenge.

The album features input from Maurice ‘Seezer’ Roycroft and Wayne Sheehy, musicians that Paul started his musical career with. A host of other players from Brittany, San Francisco and Northern Ireland, Bordeaux, west Cork, London and Dublin also contributed creatively. Paul describes the valuable input of working with so many talents “This mixture of musicians took me out of my shell and pushed me towards a different way of playing and recording the song”.

This album reminds me of James Taylor / Gomez / Paul Young / Nick Drake. Great voices singing great songs, the simplicity of this formula delivered so beautifully has resulted in Paul Tiernan creating an album that is truly a gift to anyone who buys it. It immediately takes over your consciousness and brings you gently by the hand and wraps you in its warm embrace. This album will hold you close and sway with you while you drift away from your own reality and end up somewhere mysterious but profoundly welcoming.''

Maurice Seezer is an Irish musician who collaborated with Gavin Friday between 1987 and 2005. Together they worked on Gavin’s first three solo albums: “Each Man Kills The Thing He Loves”, “Adam n Eve” and “Shag Tobacco”.

In 1985 he joined Flex and The Fairweather, fronted by Paul Tiernan, as keyboard player. Late ’86 he is introduced to Gavin Friday through a mutual friend and starts working with him in the Blue Jaysus club and eventually cements his musical partnership with Gavin when they start working on the demo tape of original material that leads to them signing with Island Records.

In 1993, he worked on Jim Sheridan’s In The Name of the Father soundtrack and co-wrote “You Made Me the Thief of Your Heart” along with Gavin Friday and Bono, which was performed by Sinéad O’Connor for the Academy Award-nominated film. Maurice has also collaborated with Gavin on the the original soundtracks of Disco Pigs, The Boxer, In America and Get Rich or Die Tryin’.

Maurice is Chairman of the Corona Fastnet Short Film Festival.