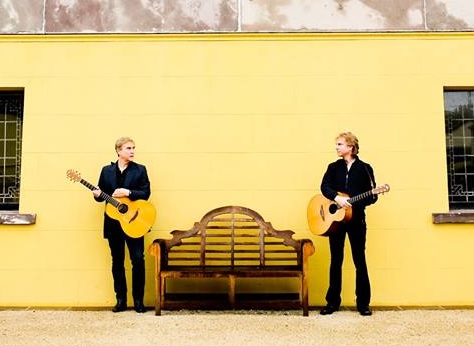 THE 4 OF US are one of the biggest bands to ever come out of Northern Ireland, and hail from Newry, Co. Down. They were voted one of the Top10 Best Irish Bands Of All Time, along with the likes of U2 and Thin Lizzy, in a recent TV3 series. This multi-award-winning band have seven lauded albums under their belt and a back catalogue of memorable songs that have featured on American, British and Irish TV and film soundtracks. To this day, their smash hit Mary, remains one of the most played tracks on Irish radio. Founding members and brothers, Brendan and Declan Murphy have been captivating audiences with their superb acoustic performances.

"Intricate arrangements, skilful lyric writing, and as we have come to expect from The 4 Of Us, the songs are imbued with considerable melodic flair. Excellent." – Colm O’Hare, Hot Press

The 4 Of Us have been a steadfast part of Irish music history for over a quarter of a century.

Formed and fronted by Newry-born brothers Brendan and Declan Murphy, they have developed a unique musical identity which has produced original and award- winning recordings, as well as a large and loyal fan base.

The 4 Of Us shot to early fame towards the end of 1989 with their debut Songs for the Tempted, which featured the massive hits Mary and Drag My Bad Name Down. The follow up Man Alive made Q magazine's prestigious Top 50 Albums of 1992 and included the UK Top 30 song She Hits Me.

The 4 Of Us were recently listed No.7 in TV3's 'Top 10 Best Irish Bands Of All Time', and to date, the Murphy brothers have notched up an enviable catalogue of timeless songs, including six top 20 Irish charting albums. Their music has also been featured extensively on American, UK, and Irish TV soundtracks.

Sugar Island, the latest album by The 4 Of Us, explores the brothers' early years growing up in Northern Ireland; musically, it focuses on the trademark interplay of their acoustic guitars. As singer Brendan recalls: ’It was a dark time for sure, but as kids we still managed to have a lot of fun. Everyone who lived through that time has their own stories to tell; we thought we’d share some of ours.’

“We’ve really come full circle,”  says  Declan. "When we started, it was Brendan and I writing and recording with a drum box.  The 4 Of Us was just two guys and two guitars. This album is a return to that ethos." The result is an uplifting album that touches on themes of childhood, family, and the passing of time against the backdrop of one of the North’s darkest periods.