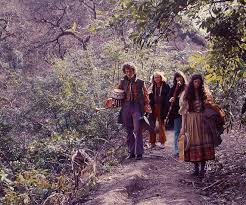 On their return from a mini tour in Dublin & London, Psychedelic folkies Dr. Strangely Strange will perform at The High Tide Club on Sat 4th May. This concert marks the 50th anniversary of their first album 'Kip Of The Serenes' which we will hear tracks from on the night. The band have also been working alongside Adrian Whittaker on a book about their glory years, 1967 - 1972, 'Fitting Pieces To The Jigsaw' which was published in mid March to outstanding praise & reviews.

Dr. Strangely Strange formed in Dublin in 1967 by Tim Booth (guitar and vocals) and Ivan Pawle (vocals, bass and keyboard). Tim Goulding (multi-instrumentalist and painter) then joined the band. Their sound was similar to that of Scottish psychadelic folk band The Incredible String Band. Dr. Strangely Strange then signed with producer Joe Boyd, who also worked with The Incredible String Band. Their album debut was Kip of the Serenes in 1969. Their second album, Heavy Petting was released in 1970, however the band soon began to fall apart after its release. Goulding joined a Buddhist monastry while Pawle and Booth went on to tour with Gey and Terry Woods. In 1973 the group joined up for an Irish tour, briefly getting back together in the early 1980s. This is Dr. Strangely Strange's third time playing The High Tide Club. The new book, 'Fitting Pieces To The Jigsaw' has received rave reviews:

"Fitting Pieces To The Jigsaw' is a rewardingly rich feast....the picture painted of Dublin's fecund counterculture scene, and the lot of itinerant musicians at the turn of the 70's as they barrel between polytechnics, folk clubs and arts labs, is as detailed and illuminating as any sociological tract - and a million times funnier/more poignant."   -  *****  Record Collector  'Fitting Pieces To The Jigsaw' will be available to purchase on the night.