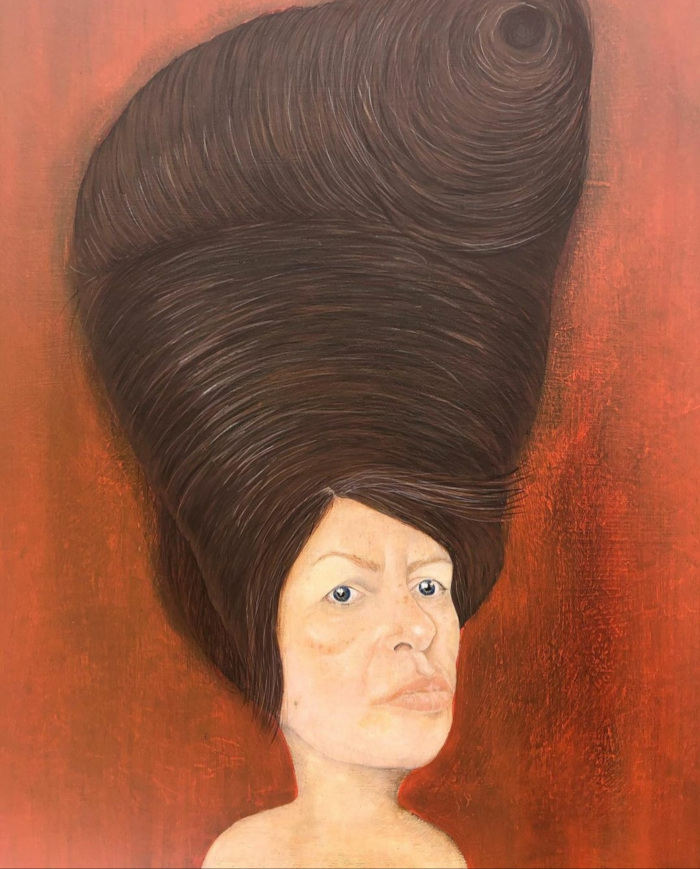 202020 celebrates the 20th Anniversary of the Sarah Walker Gallery since opening. Each artist’s practice is distinctly individual, while successful in complimenting one another on the walls of this wonderful open space. On entering the building you are struck with the colourful and exciting large-scale paintings by Taffina Flood that brighten up the gallery on rainy days, and add a bouncing energy on the sunny ones. In contrast Cathy Bacon’s work brings up a familiarity in the storytelling of common life events, some misted with what seems to be an unsettling memory, allowing for a quiet and contemplative moment in the gallery. Rachel Ballagh’s striking and memorable portrait alongside her other work, provides an insight into her thinking and consciousness of the ordinary. Sarah Walker’s work shows off the beauty of the surroundings in West Cork, a place where she is proud to ground her livelihood.

Rachel Ballagh was born in Dublin and graduated from the National College of Art and Design in 1992. She worked in Temple Bar Gallery and studios until 2002, where her practice was largely lens based, before moving to East Cork. In Ballycotton where she lives and works, she was immersed in nature. There she has attempted to highlight the extraordinary in the ordinary, where she decided to concentrate on line and form to create a sense of “ if you stand still for long enough, you also will be engulfed by Nature “. Rachel's current practice is semi-autobiographical and can only represent what is important to her. She challenges herself to express herself on a larger canvas. Exploring notions of Identity, mental health, dystopia and the damage of the Anthropocene era. Drawing and painting play a major role in realizing these ideas, where irony is not out of place.

Her painting High Anxiety seen above is a response to the current global pandemic.

Cathy Bacon originally a dubliner, settled in Beara in 2002. In 2016 she graduated from Crawford College of Art where she went on to do a Master's in Art and Processes, which she completed in November 2019. Cathy has shown regularly in the Sarah Walker Gallery. She has received several commissions, including a commission from the Marine Institute on the impact of global warming on coastal communities and her work has been shown in a number of group exhibitions.These recent paintings depict universal intimate moments that become the disputed memories of family life. Caravagio's Mother Bakes a Birthday Cheesecake is a humorous glimpse of familial celebration; Worship, a tender rendering of a shared history from a 70's holiday snap. In the large scale Learning to Swim by Drowning, Bacon portrays the difficulties of balancing emotions while facing extreme loss and grief.