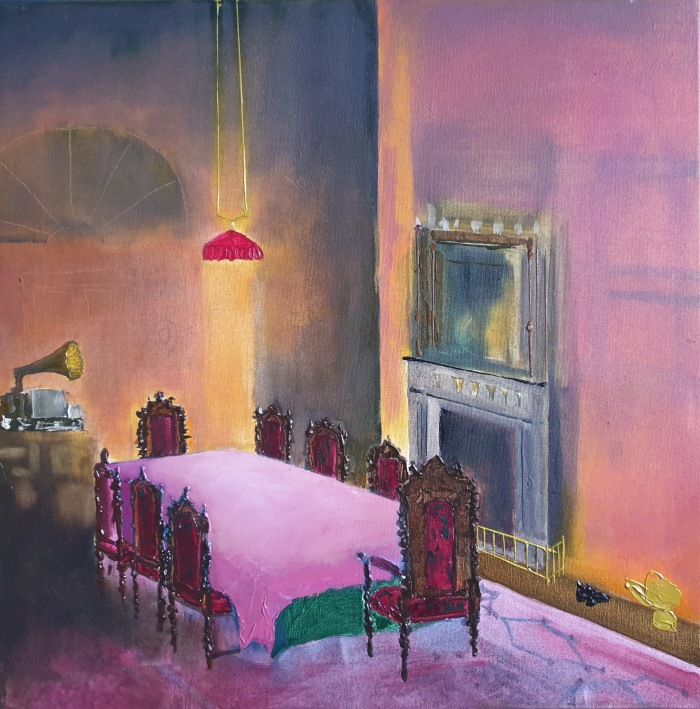 Oliver Sears Gallery is pleased to announce the launch of a new exhibition of paintings by Dublin born artist, Sarah Walker.

Accompanied by an illustrated book, the exhibition narrates the story of the artist’s maternal grandfather, Walter Leonard Cole, T.D. and Alderman, and of his magnificent house in Mountjoy Square, an underground meeting place for the Dáil and Treaty negotiations in early 1920's Dublin.

During the War of Independence, the house was constantly raided in search of arms and documents and was once set on fire. Intertwined with this dramatic history, we learn about Walter’s friendship with Christina Swanzy, the widow of Sean Connolly, Abbey actor, Captain of the Irish Citizen Army and the first person to fire a shot in the Easter Rising. (He was fatally wounded by a sniper the same day).

The paintings come as reconstructed childhood conversations between the artist and her mother, the art critic Dorothy Walker, diary excerpts written by Christina Swanzy’s daughter Madge as well as a trove of contemporaneous photographs taken in Mountjoy Square; evocations of the mysterious Christina before the artist’s grandmother arrived in Walter Cole’s life. Among the photographs, Walter and Christina appear with friends including Arthur Griffith and Eamon De Valera in relaxed and casual poses - an unusual informality for photography of the period.

Walker’s paintings are rendered in a similar style to her Boxing Diary series in 2015. Small scale canvases that hold the intimacy of a personal narrative. Flat blocks of colour construct the rooms of the house and thick impasto fill them with furnishings. The features of the characters appear two-dimensional but their clothes are picked out in impasto. The effect is to distinguish between the soft fabric of inherited memory and the solid certainty of inanimate objects, often the scaffolding of inherited memory.

Beyond the keyhole view of a handful of protagonists during the momentous birth of the nation, Sarah Walker’s exhibition is also a story of women and the kindnesses of men, told by women through the last century in Ireland.

A book accompanies the exhibition titled

Fully ilustrated featuring all of the paintings from the series, and the story of the house told in two texts from the 1940s, with a contemporary introduction. €25