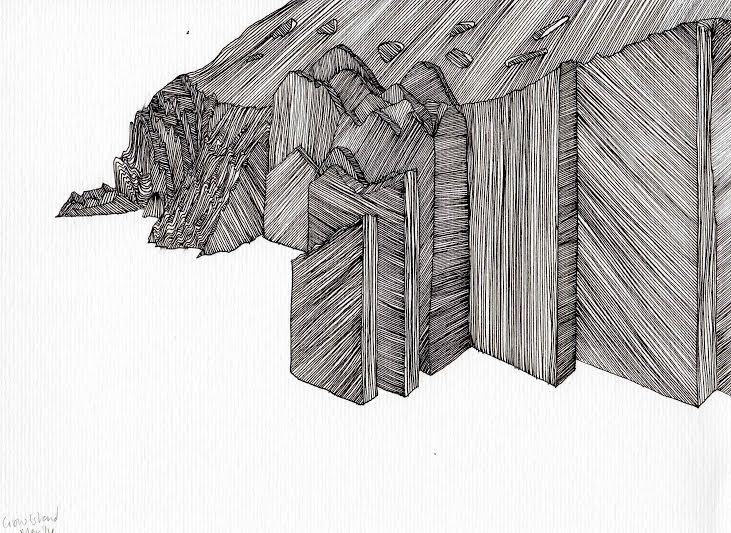 Mary graduated with a degree in Electronic Engineering from CIT in 2003 and worked as an engineer with a multi-national company designing electronic devices. Moving to Beara in 2008, she came to know the great community of artists here and began working as a graphic designer for the Buddhist centre Dzogchen Beara. Over time she began selling her own artwork in local galleries. In 2011 she exhibited in the Ennistymon Courthouse gallery and she was involved in the Allihies Summer Arts Festival in 2012.

Crow Head An Investigation includes an array of media. Her subject matter includes the birds, cliffs and turf thuiles (made of stone). She uses watercolour, acrylic, oil paint and ink on paper from different sources. Her large aerial drawings of Crow Island bring a sense of place and context to the exhibition. The turf thuile will be a re-construction of thuiles found on Crow Head and other coastal regions like the Burren.

Mary described how she liked this idea of using what is readily available to create new work. She uses pages from her collection of old books to paint and draw on. Books, in fact, that she had purchased in the local market in Castletownbere.

Through her own research Mary found out that turf thuiles are stone constructions that were used to dry a form of solid fuel, similar to turf, made from cowpats and earth. The thuiles are a fascinating source of social-historical information, showing how resourceful people on the peninsula had to be in order to survive. Bringing the thuile structures into the gallery ties the exhibition together, rooting it in the landscape of Crow Head.

For Mary the process of drawing and researching began in February. It evolved for her out of her love of the area. She wanted to capture the different elements of the headland. Her artworks trace the landscape, the wildlife and the human interaction with it.

Opening event on Friday September 19that 7pm, followed with music by The West Cork Ukulele Orchestra

Suitable for all ages