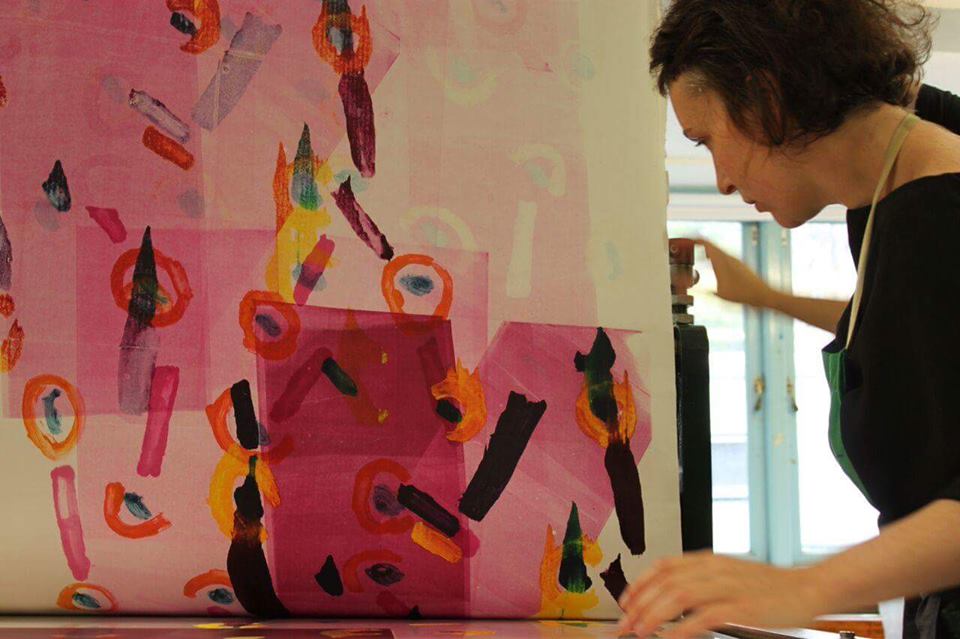 Sarah describes her painting as 'dressing up boards', she uses lots of paint and pieces of fabric and tassles to create pieces which don't necessarily stay on the wall but can drift into the gallery space and bring the viewer into a world of colour. Her work is playful and uplifting, although she claims it's based on the menial tasks of everyday family life, the end result is bursting with a real sense of joy and satisfaction.

In her exhibition this June at Sarah Walker Gallery, Sarah O'Brien is exploring painting through a focus on habitual and domestic actions. Sometimes looking at labour associated with construction, large paintings created with sweeping brushes/toilet brushes and cement trowels realise an unintended aesthetic potential.
Domestic chores are more frequent than artful ones in Sarah's everyday life, this comes through in the work. It is also in keeping with Sarah's method of painting as a space where processes drive the work and everything emerges from this. The lack of control inherent to paint as a medium makes the process all the more engaging.

Sarah O’Brien’s practice is focused on drawing and painting based installation. Earlier this year she exhibitied in the West Cork Art Centre, Uilinn in a group exhibition Unfold. Recently she took part in The Kindly Ones in the Crawford Gallery, Cork, SYNC, Galway Arts Centre and Eigse. She has exhibited nationally and internationally, having solo shows at Pallas Contemporary Projects (PCP) in May 2008, Very Common Glory, Draiocht Arts Centre in January 2011 A Circle Dance and Stutter and fluid, Bar 8 Galway, curated by Galway Arts Centre.

Among selected group exhibitions Sarah took part in Holding Together (Autumn 2010) at the Douglas Hyde Gallery, Dublin which celebrated 50 years of the Modern Art Collection at Trinity College. 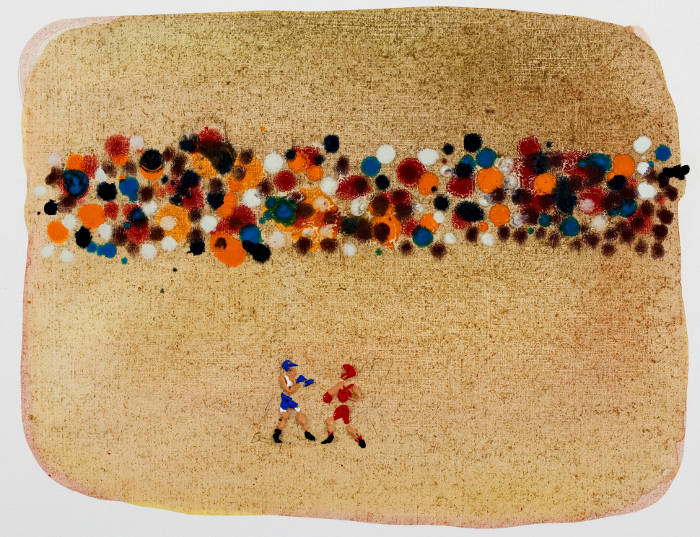 Currently on show a selection of Sarah Walker paintings.

'In the Garden of Last Things' by Bénédicte Coleman, curated by Melania Lynch 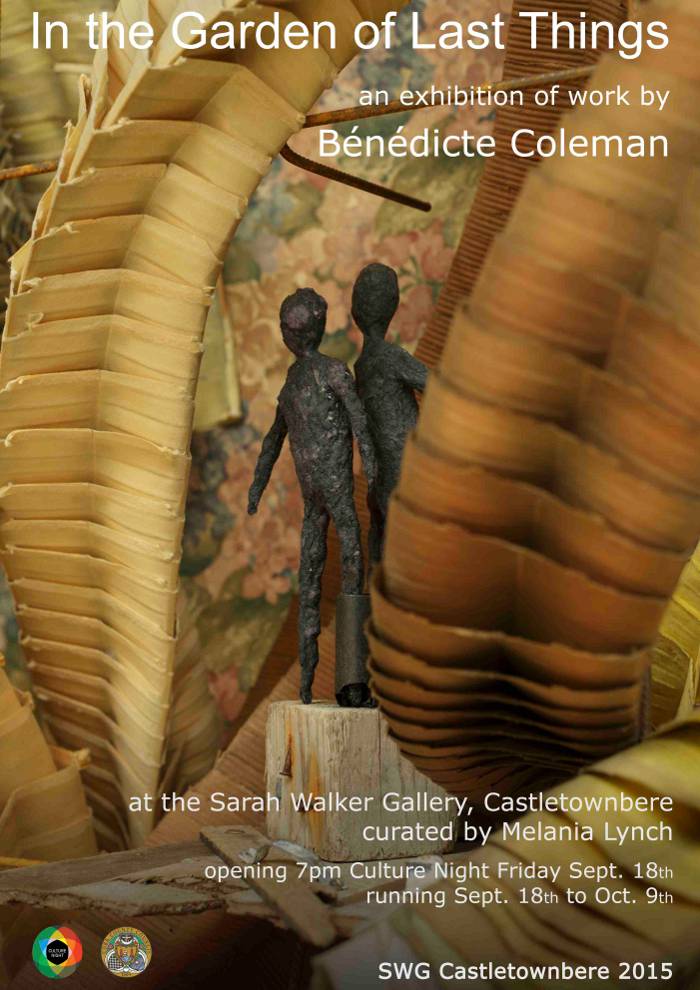 Opened on Culture Night on the 18th of September 2015 an exhibition by Bénédicte Coleman 'In the Garden of Last Things' runs until October 9th.

These are the last things … one day they will disappear and never come back … you learn to take nothing for granted. Close your eyes for a moment, turn around to look at something else, and the thing that was before you is suddenly gone. Nothing lasts, you see, not even the thoughts inside you. (Paul Auster: In the Country of last things: 1-2)

Read more: 'In the Garden of Last Things' by Bénédicte Coleman, curated by Melania Lynch

Sarah Walker Gallery is delighted to host graduates from art colleges around the country.

This year’s summer show will be a selection of work by Rachel Doolin, Hazel Ramsay, Ryanse Elle and Andrew Whitelaw from CIT, Crawford College of Art & Design, Genevieve Howard, Eoin O'Reilly and Eimear Murphy from NCAD Dublin, Brendan Finnerty from LSAD, Limerick and Nicola Chestnutt from Waterford Institute of Technology. The exhibition titled ‘The Blue Thread’ refers both to colour and material throughout the show. The show will be made up of installation, photography, sculpture, ceramics and jewellery.

Banahan is known for his reflective portraits of childhood in which children’s faces are viewed, with a certain posed formality ,through patterned fabric screens, a device that bestows a distanced retrospective quality. Here he exhibits a series of paintings homage to Vermeer and Ingres as well as two small paintings of boys on timber. 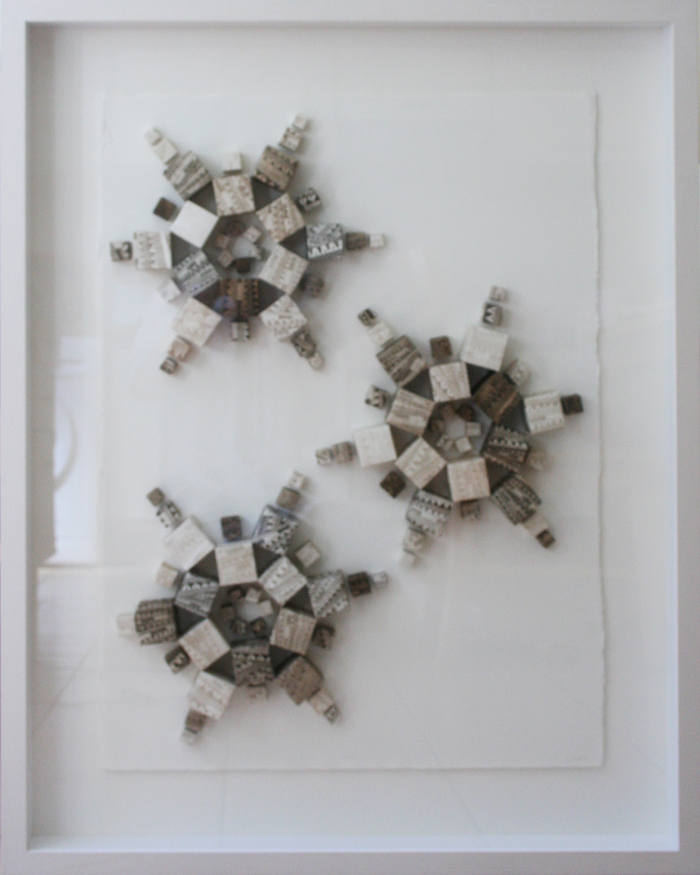 Jennifer Comerford born in Tipperary is a graduate student from GMIT.Her original printed paper cut into geometric shapes in monochrome colours are based on concepts of the personality and the working mind “a place of mass storage”. These are intricate yet logically laid out art works which bring into focus the functions of the brain, it's ability to store memories, thoughts and encounters. The mind being a place of mass storage always engaged and working. Comerford plays with the idea of seeing the personality as a whole through representations of the subconscious. In her work we are invited to go behind the scenes into the deeper hidden workings of the personality. 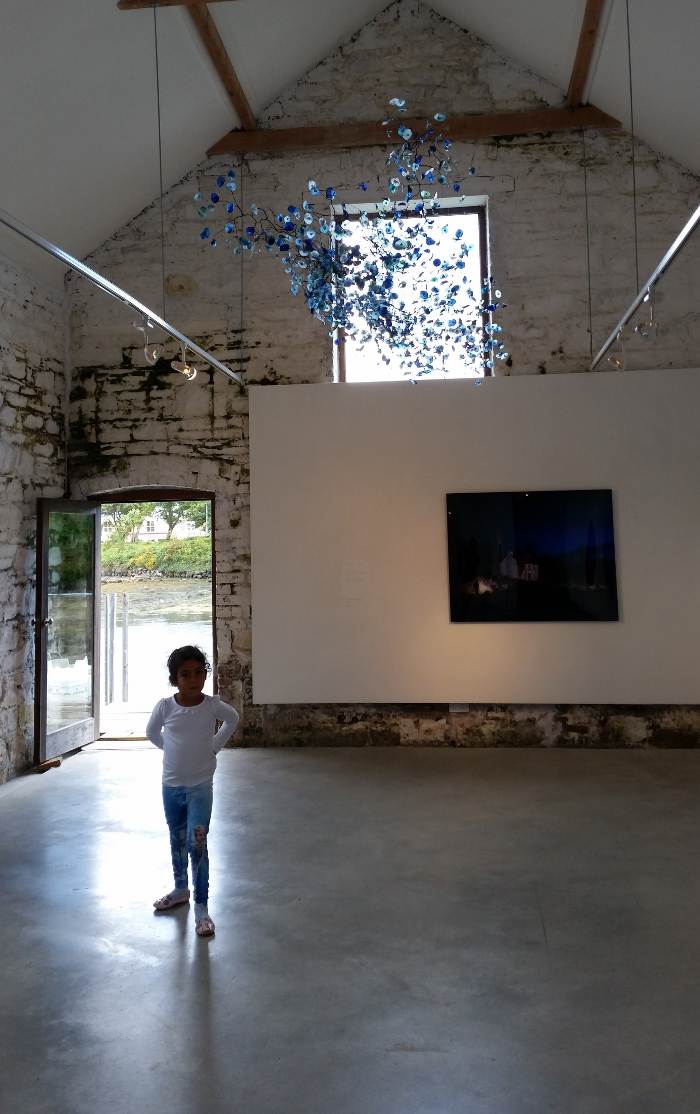 Currently on show a selection of Sarah Walker Paintings including some paintngs from The Boxing Diaries series and a selection of graduates work from the summer show, suspended installation by Rachel Doolin, photograph by Brendan Finnerty and the Marigold glove drawing installation by Hazel Ramsay. Upstairs a wide selection of ceramics and smaller pieces including award winnning graduate Andrew Whitelaw's ceramic sculptures. 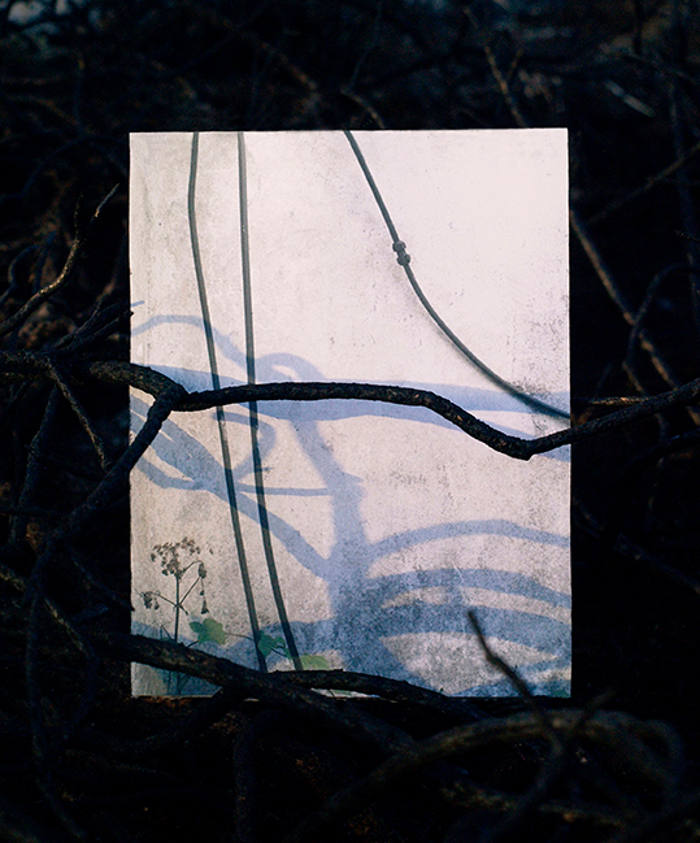 Currently on show are digitally photographed minature paintings of West Cork landscapes by Finola Cooney that capture feelings of the object's poetic ability. Finola shows how mundane objects (in this case man-made ditritus) which she found emerging in her studied landscapes, can take on interesting new realms when given attension and focus. Also being exhibited are some brilliently unique oil on patterned fabric paintings by Tempy Osborne.Tempy manages to create images which individually convey small ideas but that can collectively tell a larger story, these works have unique small aspects painted with a great amount attention to detail. There is a mixture of Arctic and Cork landscape inspired paintings on show in the gallery. Throughout Tempy’s work ideas of climate change, mass culture and fear of the unknown are continually prominent. 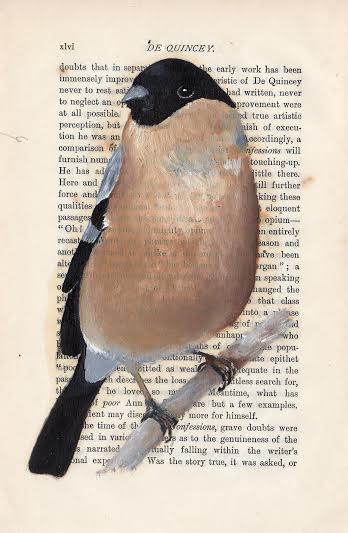 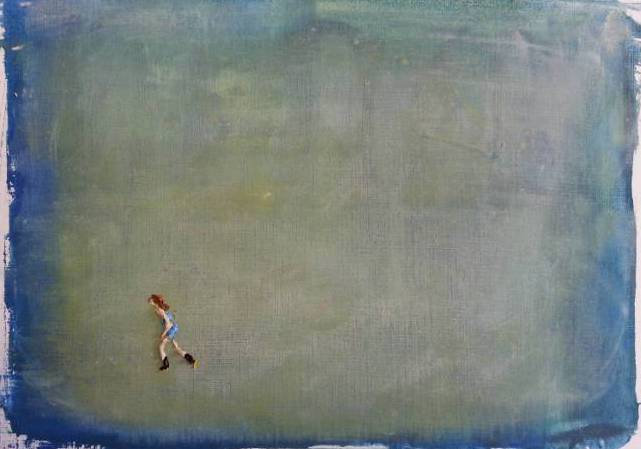 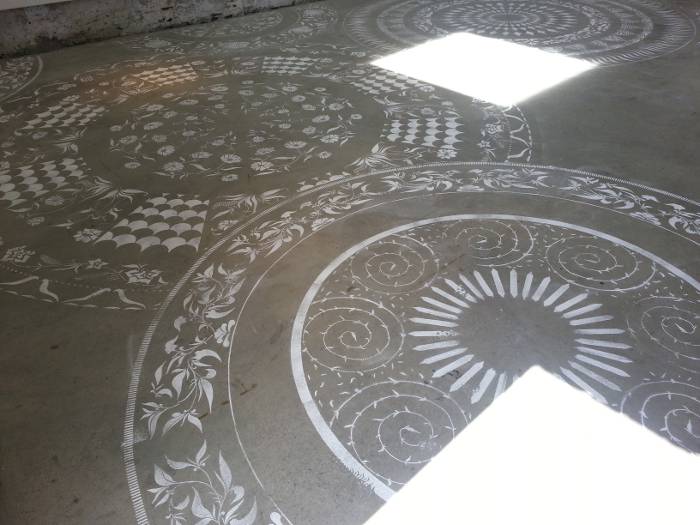 Darragh Wilkins, recent graduate from Crawford College of Art will create an installation which explores the relationships between material, process and mass produced commodities. As an artist Darragh described how he takes "an experimental approach to sculpture making, exploring the physical possibilities of material". 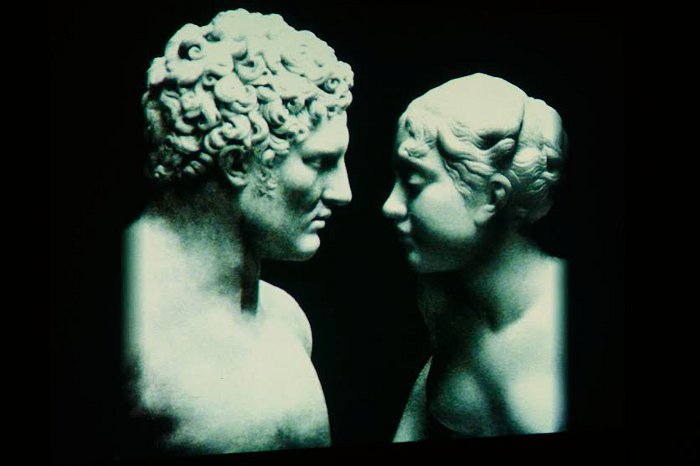 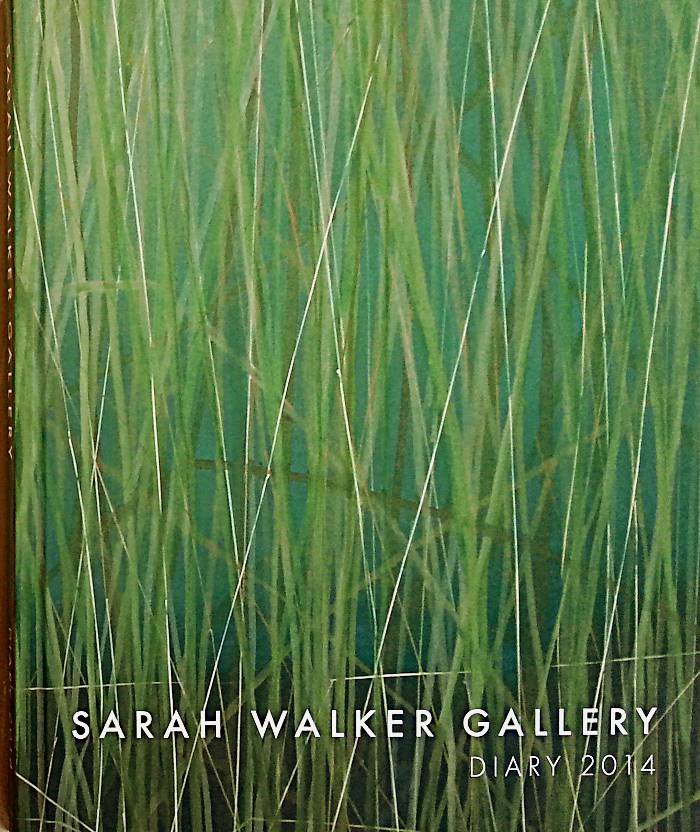 The 2014 Diary features the work of Sarah Walker and work from previous solo and group shows exhibited in the Sarah Walker Gallery.

Melania Lynch's  solo show consists of an installation of sculptural pieces along with paintings and drawings.  Her work has been shown in the gallery previously in the three person show "Skylike and the Monkey Minds", see previous exhibitions.

Also showing in the Inner Gallery is a sound installation by Tess Leak; "Field Recordings of a Resurrection Machine" 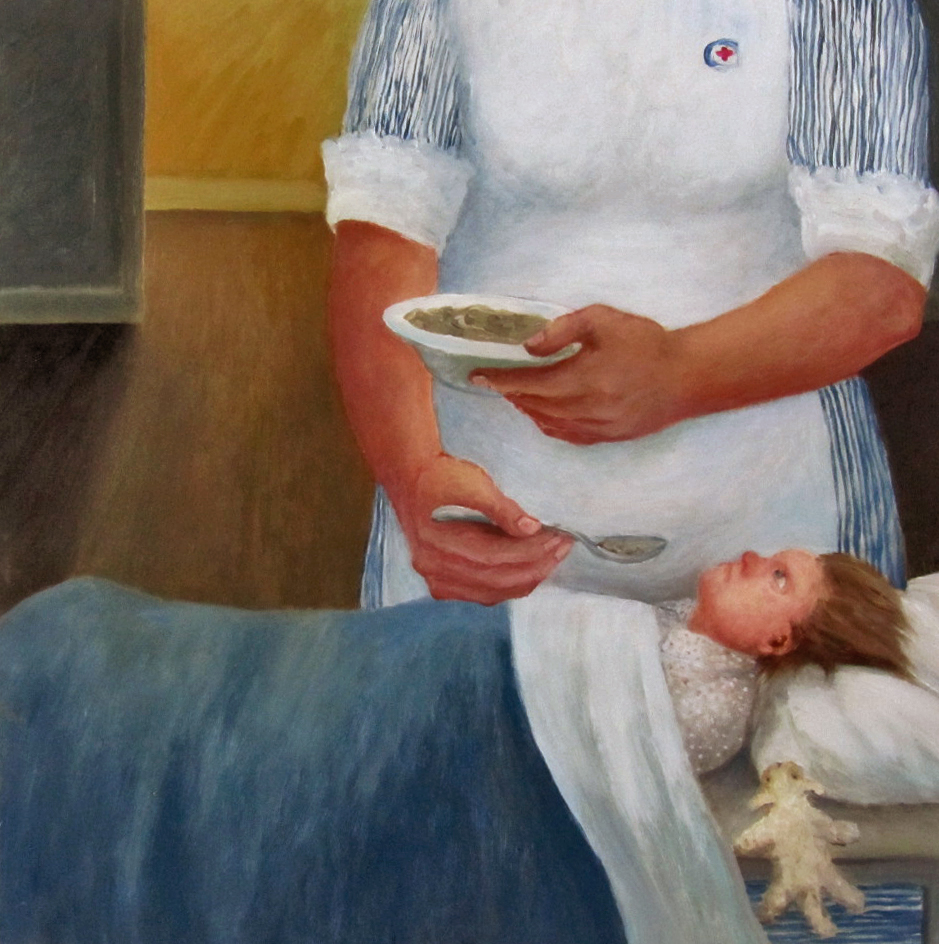 'Eat Your Porridge' is an exhibition of a series of recent paintings by Jenny Richardson, painted from memories of the time she spent in the Princess Margaret Rose Hospital in Edinburgh in the early 1950's.

Having contracted polio in Tripoli, Libya where her army doctor father was in charge of the British Military Hospital she was then brought to the PMRH in Edinburgh. At only 4yrs of age Jenny was shocked at her parent's desertion & was left immobilised in bed on a wooden board, to be exercised only in water, avoiding all load bearing activity whilst the staff worked to reactivate her wasted muscles. Here she would reside for the next 12 months. During this time Jenny was subsumed into the institutional world of the ward, whose great windows looked out on a grey Scottish cityscape, so far from the mimosa tree outside her bedroom window in Libya. 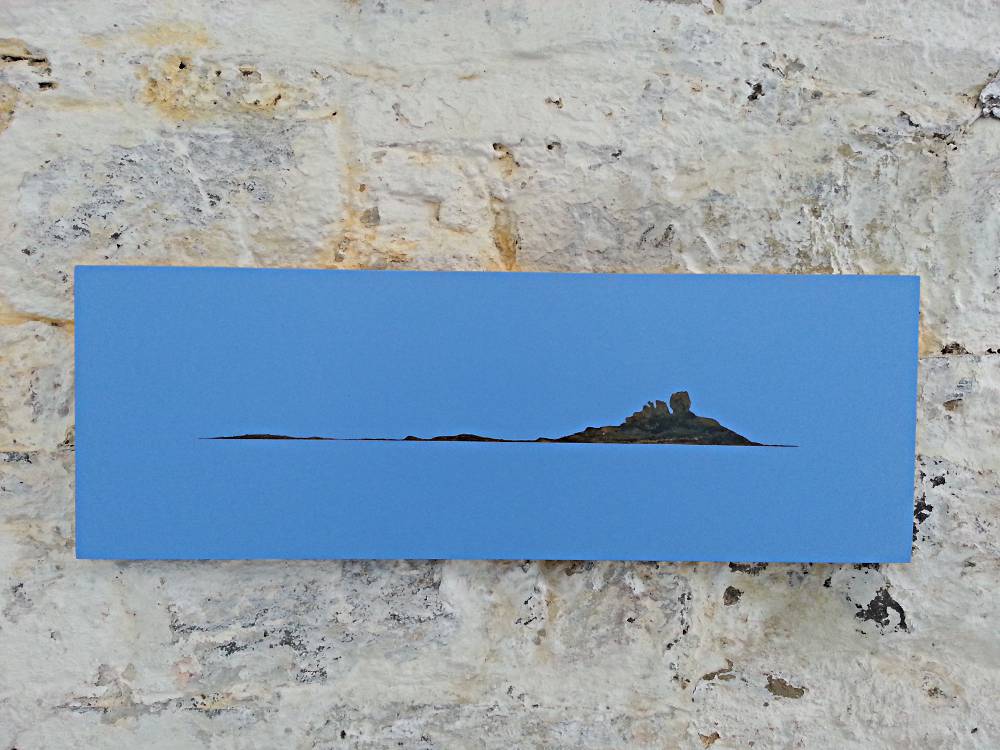 Damian Magee graduated with a BA (Hons) Fine and Applied Art – University of Ulster, Belfast (1998), and took Foundation Studies in Fine art And Design in Lurgan Technical College. "For some time" he explains, "I have been producing analytical paintings of the landscape found in and around Ireland, with a particular focus on the essential physical geography in the form of isolated islands, documented within expansive colour fields". "Utilising this documentary context, the ‘neutral' space becomes an arena in which to explore subjective relationships between physical geography and interconnected systems of identity. Social, religious, historical, political and psychological space has been aggregated onto the painted surface transforming the objective arena into a pregnant space where landscape and culture become inextricably connected".

The first thing you see when you enter this year’s summer show is a chaotic sculptural form rising towards the 20ft height ceiling of the main gallery. It also could be described as a giant paper Jack in the Beanstalk. This is the work of Caroline Keane, just graduated from Limerick School of Art and Design. The piece is made of handmade paper, Caroline is interested in the excess material objects consumed and discarded within our environment, she is curious about the amount of waste accumulated by an individual and she uses the left over materials of consumption in a creative way as an art material. 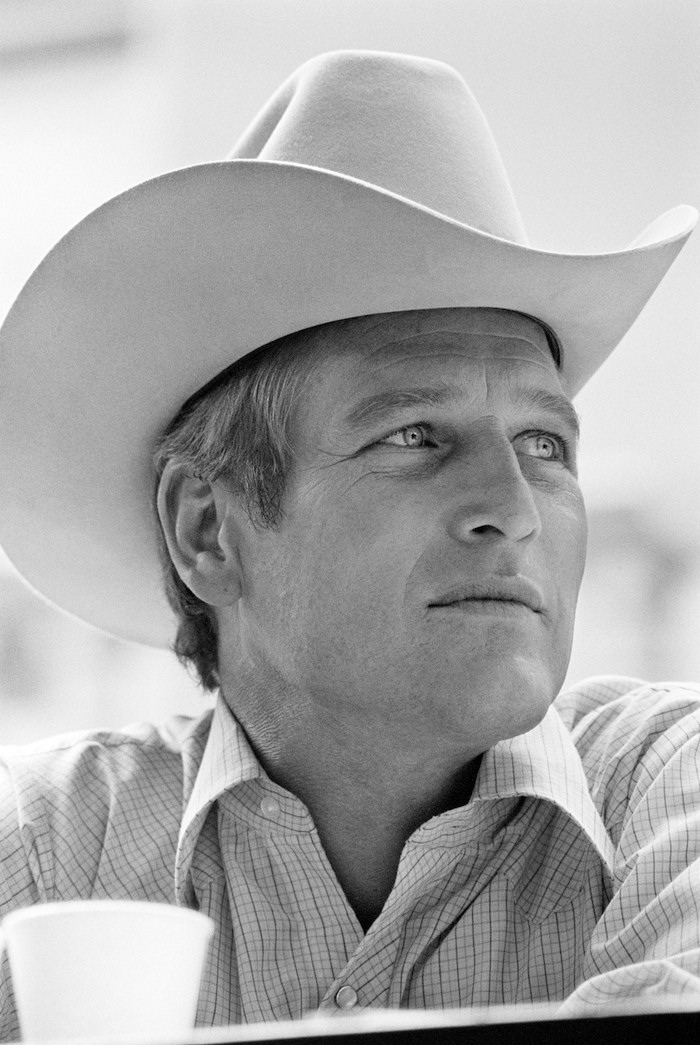 Terry O’Neill is an internationally renowned press photographer whose iconic images are now recognised as works of art. 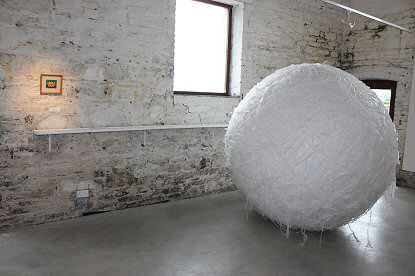 Work by a selection of 2012 graduates and paintings by Sarah Walker. 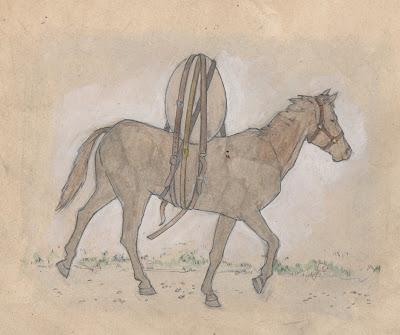 Sylvia Krieg's ink and watercolour paintings and drawings, an interesting take on the Beara peninsula.

Sinead Fagan's beautiful ceramic vessels, saggart fired where pieces of wood and natural objects are fired with the vessel to make patterns on the piece which resemble landscape painting.

SKY-LIKE AND THE MONKEY MINDS 2011

"Sky-Like and The Monkey Minds"

"I think monkey mind is our ordinary mind, it's when we can't really settle our mind. Looking or searching for ground, "trying" to understand...like a process of developing....it is an experience of chaos.  "Sky-like" is our natural state of mind, without chaos, without clouds, just that. Like space, quiet and limitless; clear, calm,without questions and needs.  I'm not sure...is this really what it is? But I like the idea of working with both concepts, knowing both states and accepting them as human experience."

- From an email from Melania to George and Tess ,April 2011

An exhibition of seven graduates of 2009 from three art colleges from around Ireland.

The graduate artists included are from the following colleges:

A celebration of the newly renovated Sarah Walker Gallery opened by Cllr Noel Harrington, Mayor of County Cork on Saturday August 23rd at 6pm. The exhibition features the work of Sabina McMahon, Rona Neligan, Sarah Kearney Niall Dooley and Edia Connole who are graduates from NCAD and the Crawford College of Art. The show continues to September 6th.